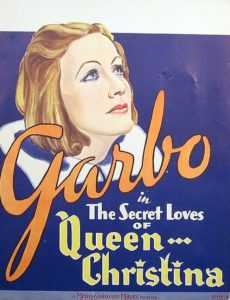 The “Ladies of Pre-Code” film series will conclude Wednesday, August 27th at 7 PM with the 1933 Pre-Code classic Queen Christina, starring Greta Garbo.  Queen Christina was one of the top three films that brought about strict enforcement of The Production Code in 1934.  The film premiered in December 1933, but its release was delayed until February 1934, due to objections from the Will Hays/Joseph Breen office.  Though the film was approved for release without cuts, the Pennsylvania State Film Censorship Board (as well as other state film censorship boards) censored its own prints before release to suit local tastes.

Based on historic fact, Greta Garbo plays the title character, a free-thinking 17th century bisexual Swedish queen who tires of pressures to marry her war-hero cousin and produce an heir to the throne.  To escape such pressures, she disguises herself as a man and travels to a country inn, where she falls in love with a dashing Spanish envoy (John Gilbert)–much to the dismay of her subjects.

Queen Christina will be preceded by a series of classic Looney Tunes shorts, including the parody cartoon “Hollywood Steps Out” (featuring Greta Garbo as a cigarette girl with huge feet), from 6:30 PM to 7 PM.

Refreshments will be provided by the Friends of Scranton Public Library.

All films in the series are free with your library card, but registration is suggested.