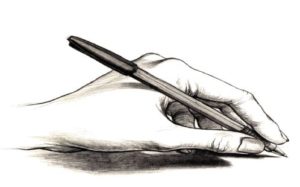 Join us tomorrow for an Art Exhibit at Library Express! On Friday, February 5th from 6PM-8PM, we will welcome local artist, Georisell Vazquez to our store.

Georisell Vazquez was born in in Caguas, Puerto Rico in 1990. He moved to America with his mother, grandmother and younger brother. From a young age, he was inspired by a lot of things: his pet cats, his love of cartoons, his comic books, and his own imagination. Growing up, however, he drew a lot from Anime and Japanese culture. Classic folklore and stories propelled him to draw them out, be it yokai, which are mythical creatures, or just the classic girl with big eyes. He is especially drawn to magical and strange things. He loves Japanese comics, but he works with real life images as well. His goal is to bring life to things that are mythical and mash them with the regular things that are well known. He wants to help people see with imagination as well as the eyes of a child. He hopes to never grow up in that aspect.
His mediums of choice tend to be inks and watercolors, as well as acrylics for both canvas and paper works. He always carries a sketchbook and pen with him, to ensure that he can practice as well as capture any ideas and inspirations that may come to him.
Currently Vazquez is studying liberal studies at Lackawanna College, and is hoping to go to Marywood University for either art education or visual art with a minor in history.