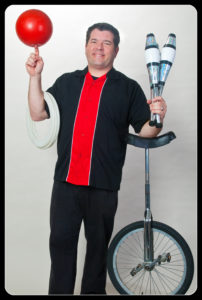 Ray Grins began performing at the age of 17 and has had a career spanning more than twenty years. The Comedy and Juggling of Ray Grins combines juggling and circus skills with comedy and audience participation in a way that brings audiences to the edge of their seats and leaves them rolling in the aisles. Ray has delighted people nationally and internationally performing in theaters, theme parks, circuses and on cruise ships. Whether he is performing in Cirque de La Mer in San Diego or with the Long Island Philharmonic Orchestra in New York City, Ray loves what he does and audiences love him! Appropriate for all ages!