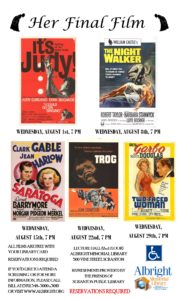 The free film screenings will be held in the Lecture Hall, on the 2nd floor of Albright Memorial Library.

The scheduled films are:

Classic cartoons will proceed the screen of each film starting at 6:30 PM.

Free refreshments (popcorn, soft drinks, and candy) will be provided by the generosity of The Friends of Scranton Public Library.

All films for free with a Lackawanna County Library System Library card, but reservations are required.

To register for any film screening in the “Her Final Film” movie series, click on the film title above or click here to register online.  To register by phone, please call Bill at (570) 348-3000, x3016.