Mayor McKune’s documents on July 30, 1877 show a conflicting account of the day. Many people believed that the situation would remain peaceful, but a letter received by an anonymous source threatened fires being set at local coal mines in the coming days.

Many workers remained on strike, but some employees of the Delaware, Lackawanna, and Western Rail Road returned to work. This gave hope to many citizens who began to hold meetings in order to pass motions and resolutions against the creation of a special police force by Mayor McKune. These documents were summarized in a letter to Mayor McKune by P. W. Stokes, a clerk. 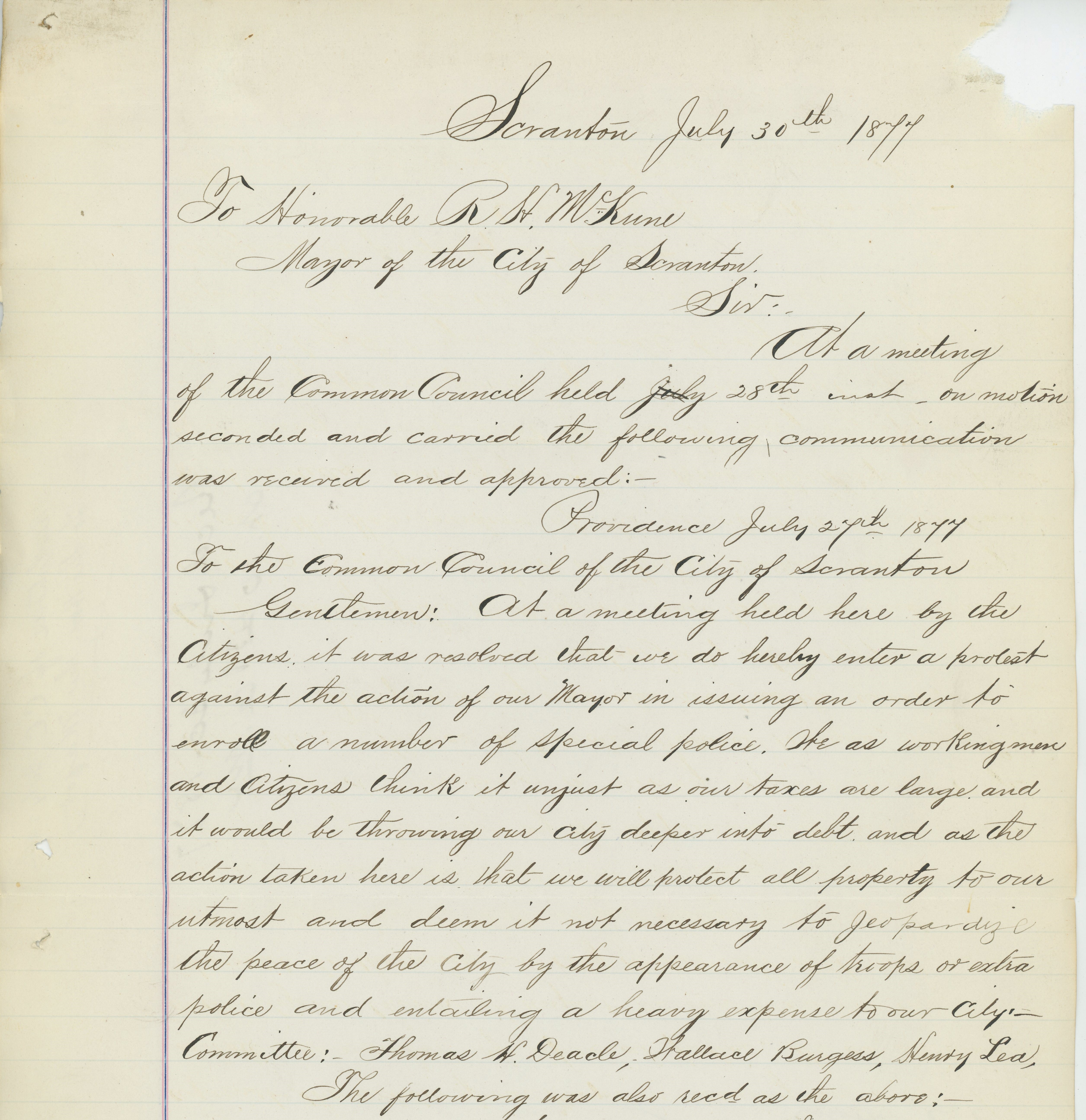 To Hon. R. H. McKune, Mayor City of Scranton Sir: At a meeting of the Common Council held July 26th inst. on motion seconded and carried the following recommendation was received and approved: Providence, July 17, 1877 To the Common Council of the City of Scranton Gentleman: At a meeting held here by the Citizens it was resolved that we do hereby enter a protest against the action of our Mayor in issuing an order to enroll a number of special police. We as workingmen and citizens think it unjust as our taxes are larger and it would be throwing our city deeper into debt and as the action necessary to jeopardizing the peace of the city by the appearance of troops or extra police and entailing a heavy expense to our city. Committee: Thomas H. Deade, Wallace Burgess, Henry Lea The following was also read as the above: 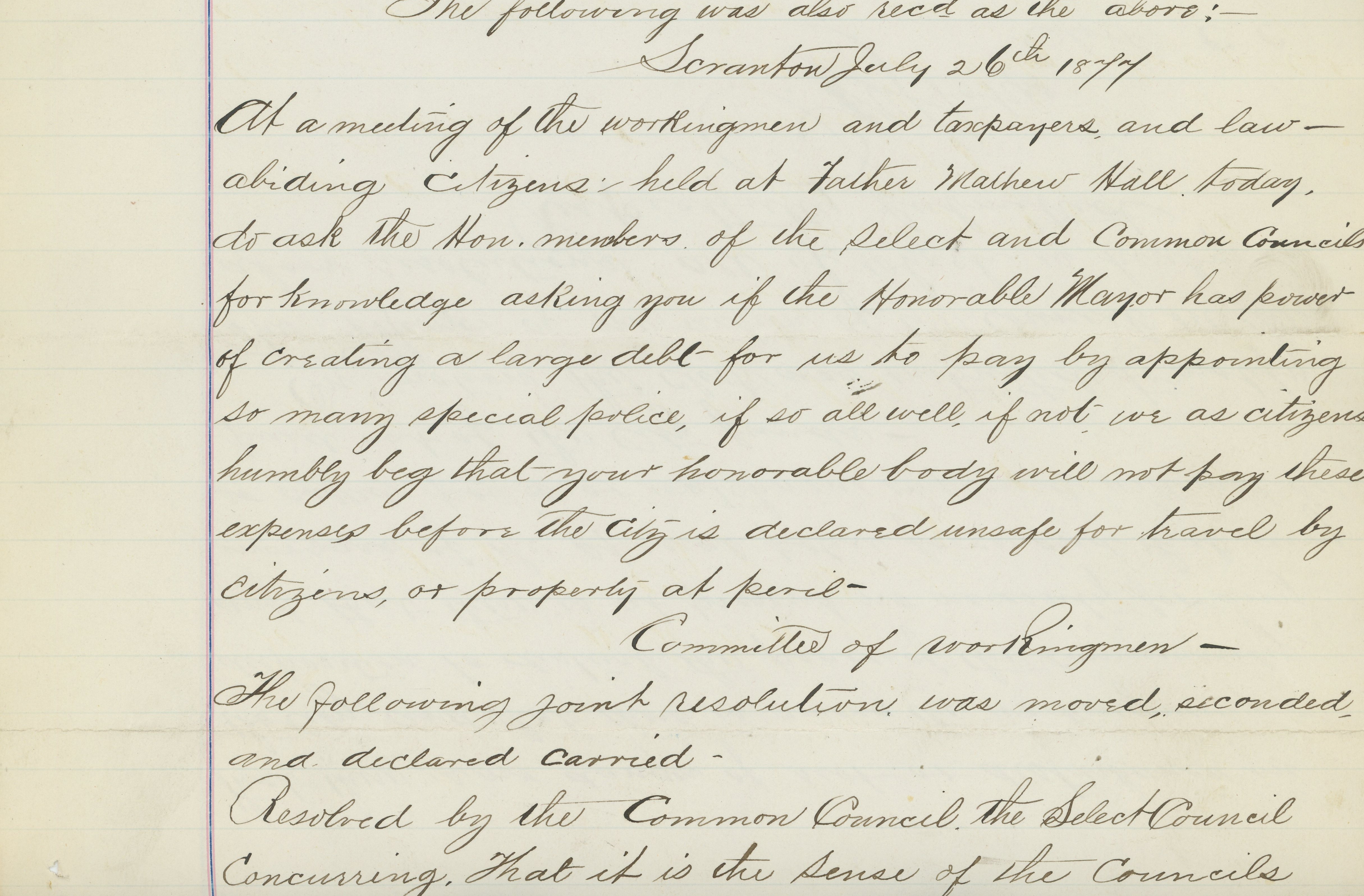 Scranton, July 26, 1877 At a meeting of the workingmen and taxpayers and law-abiding citizens held at Father Mathew Hall today do ask the Hon. Members of the select and Common Councils for knowledge asking you if the Honorable Mayor has power of creating a large debt for us to pay by appointing so many special police, if so all well, if not we as citizens humbly beg that you honorable body will not pay these expenses before the city is declared unsafe for travel by citizens, or property at peril. Committee of Workingman The following join resolution was moved seconded and declared carried: Resolved by the Common Council the Select Council concurring, that it is the sense of the Councils 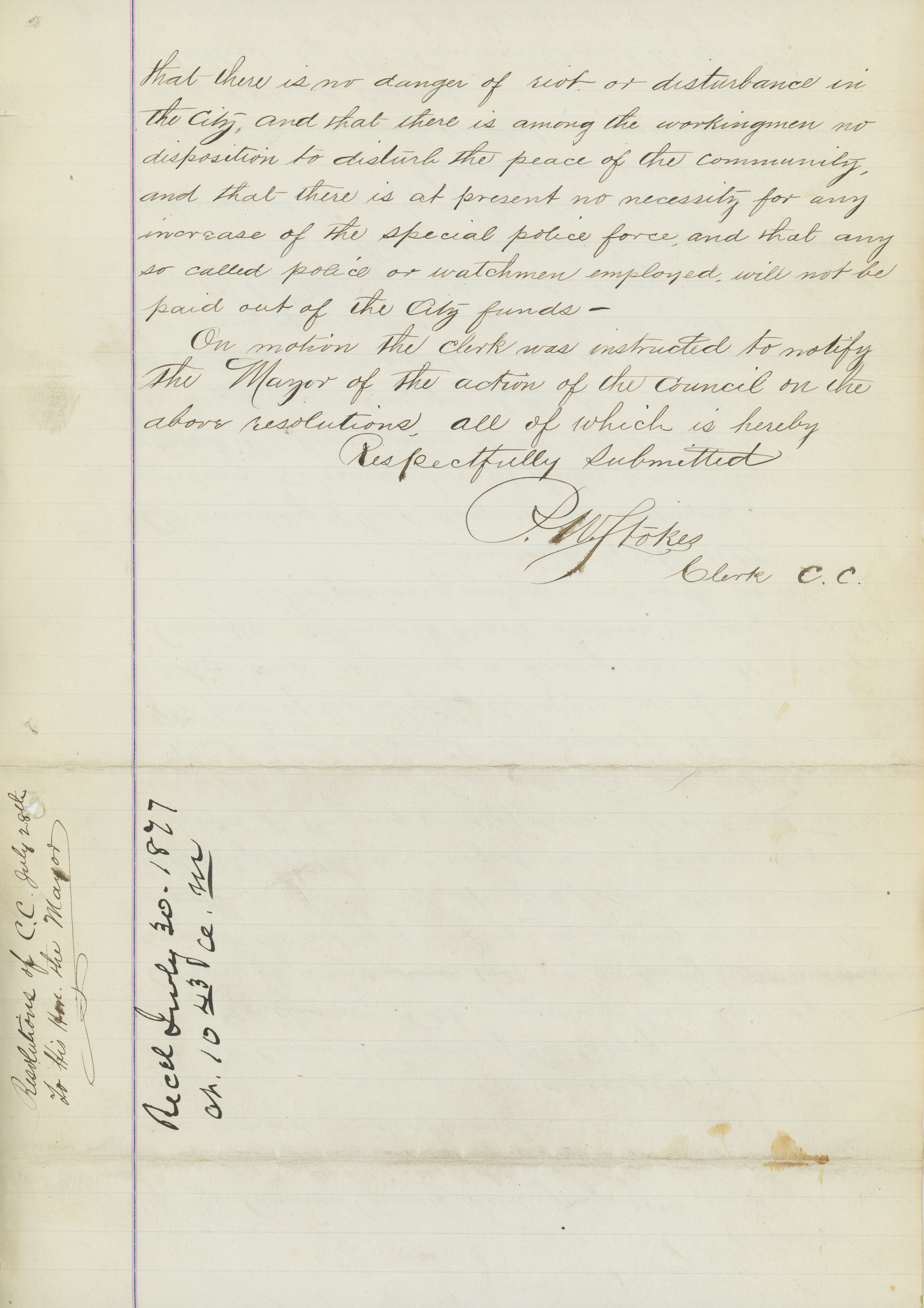 that there is no danger of riot or distribution in the city and that there is among the workingmen no disposition to disturb the peace of community, and that there is a present no necessity for any increase of the special police force, and that any so-called police or watchmen employed will not be paid out of the city funds. On motion the clerk was instructed to notify the Mayor of the action of the Council on the above resolutions, all of which is hereby Respectfully submitted, PW Stokes, Clerk, C.C.

Although the day remained peaceful, an anonymous letter claiming fires would be intentionally set at mine shafts in the area was left in the engine room of Staple and Fancy Dry Goods, Hosiery, Notions, &c. located on Main Street in Scranton. In communications between Mayor McKune and John Johnson, the chairman of the Esc. Committee of Miners and Laborers, it is determined that this is a false threat. 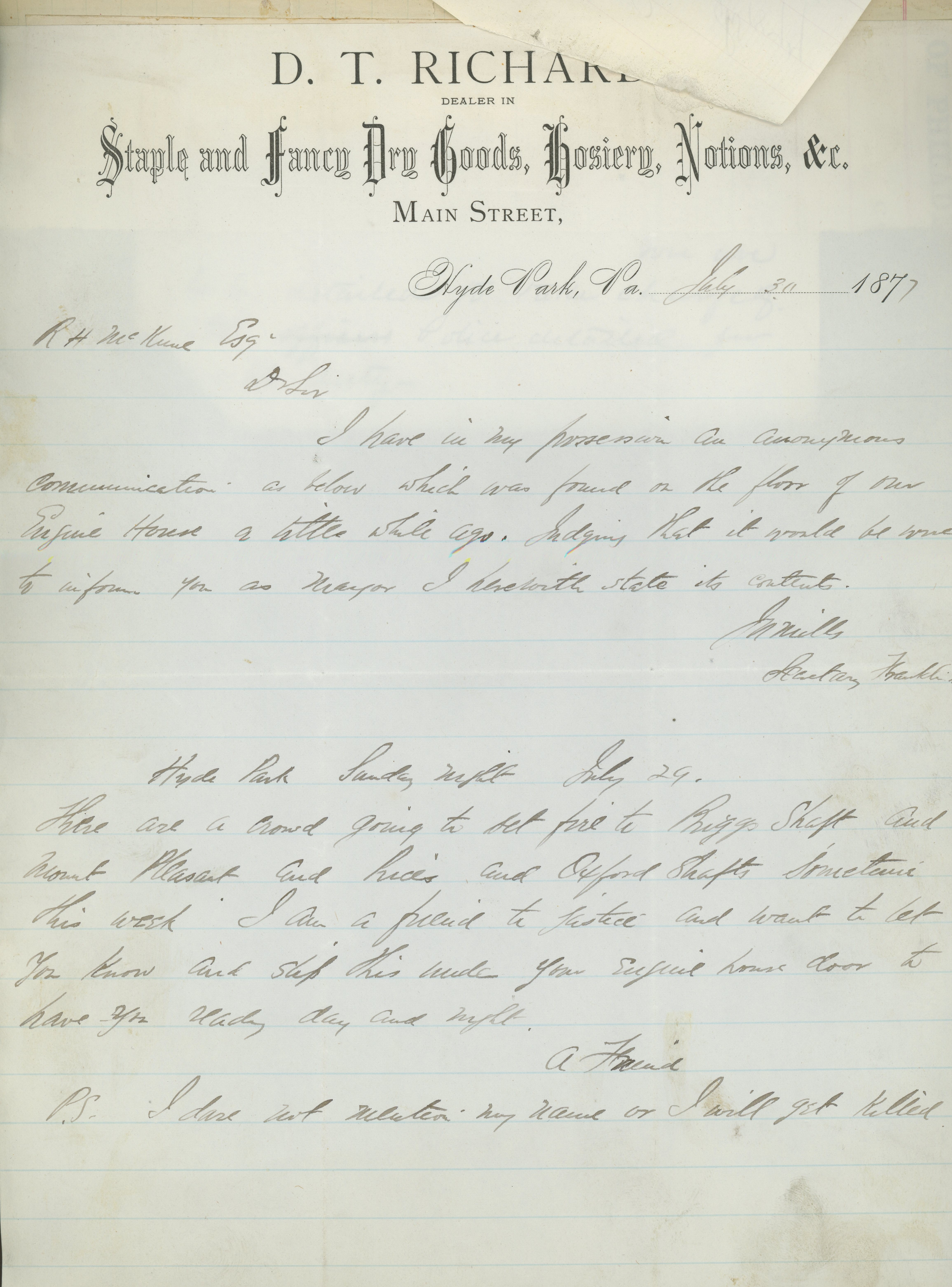 I have in my possession an anonymous communication as below which we found on the floor of our Engine Room a little while ago. Judging that it would be wise to inform you as Mayor I herewith state its contents J.M. Mills, Secretary Hyde Park, Sunday Night, July 29 There are a crowd going to set fire to Riggs Shaft and Mount Pleasant and Rice’s and Oxford Shafts sometime this week. I am a friend to justice and want to let you know and slip this under your engine house door to have you ready day and night. A friend P.S. I don’t mention my name or I will get killed. 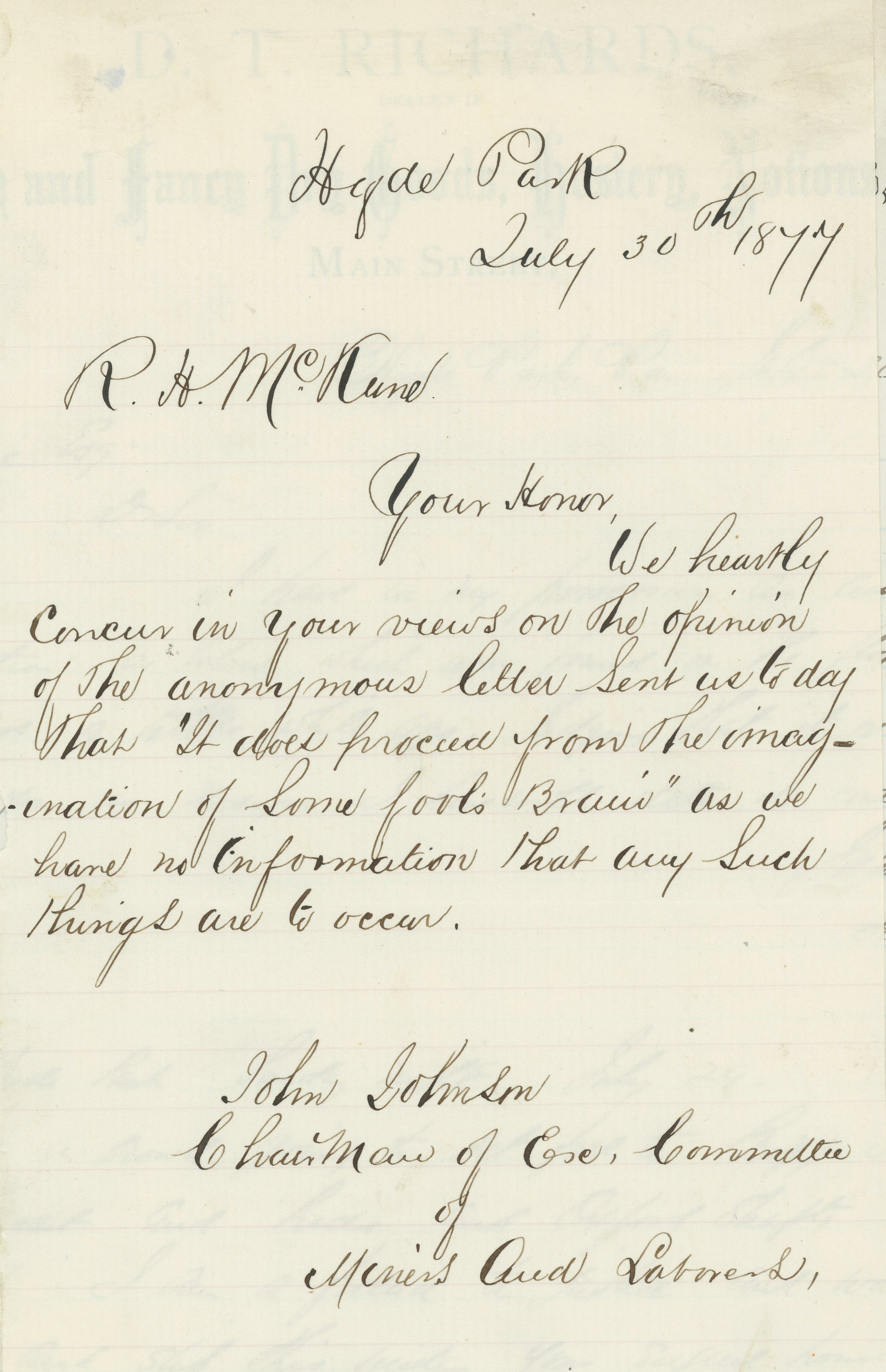 Hyde Park, July 30, 1877 R.H. McKune Your Honor, We heartily concur in your views on the opinion of the anonymous letter sent us today that that it does proceed from the imagination of some fool’s Brain as we have no information that any such things are to occur John Johnson Chairman of Esc. Committee of Miners and Laborers