Scranton Public Library continues its Stars From Scranton film series with a screening of the 1939 musical comedy The Under-Pup, starring Scranton native Gloria Jean, on Wednesday, 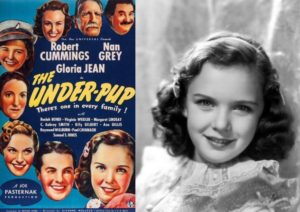 Although she was born in Buffalo, NY, Gloria Jean (1926-2018) and her family moved to Scranton, PA when she was just six months old; she has always considered Scranton her hometown.  She performed on local radio as a child and was known regionally for her pristine operatic singing voice.  Throughout her career in Hollywood, she was widely viewed as an equal to other juvenile stars of the time like Judy Garland and Deanna Durbin.

Gloria Jean made her film debut in 1939’s The Under-Pup, which had its premiere in Scranton at The Strand Theater on August 24, 1939 (our screening is three days short of the 80th anniversary of its Scranton premiere).

The Underpup tells the story of Pip-Emma, a young city girl from a poor family who wins an essay contest to spend the summer at a camp for girls from wealthy families. At first made fun of and ridiculed because of her background, she determines to show the snooty rich girls she’s just as good as they are.

On a sad note, Gloria Jean passed away last September at the age of 92.