Due to his injuries, Mayor McKune did not write any correspondence or send any telegrams on August 2, 1877. The First Division of the National Guard under the command of General Brinton, a company of the National Guard under the command of Major Huidekopper, and Governor Hartranft arrived in Scranton on that morning. As the city was put under martial law, people began to question if the previous day’s events were an actual riot and if the Scranton Citizen’s Corps were too quick to fire upon the crowd.

There are two letters in his paper announcing the arrival of General Brinton and the National Guard. Both letters contain instructions and suggestions about how the city should proceed. 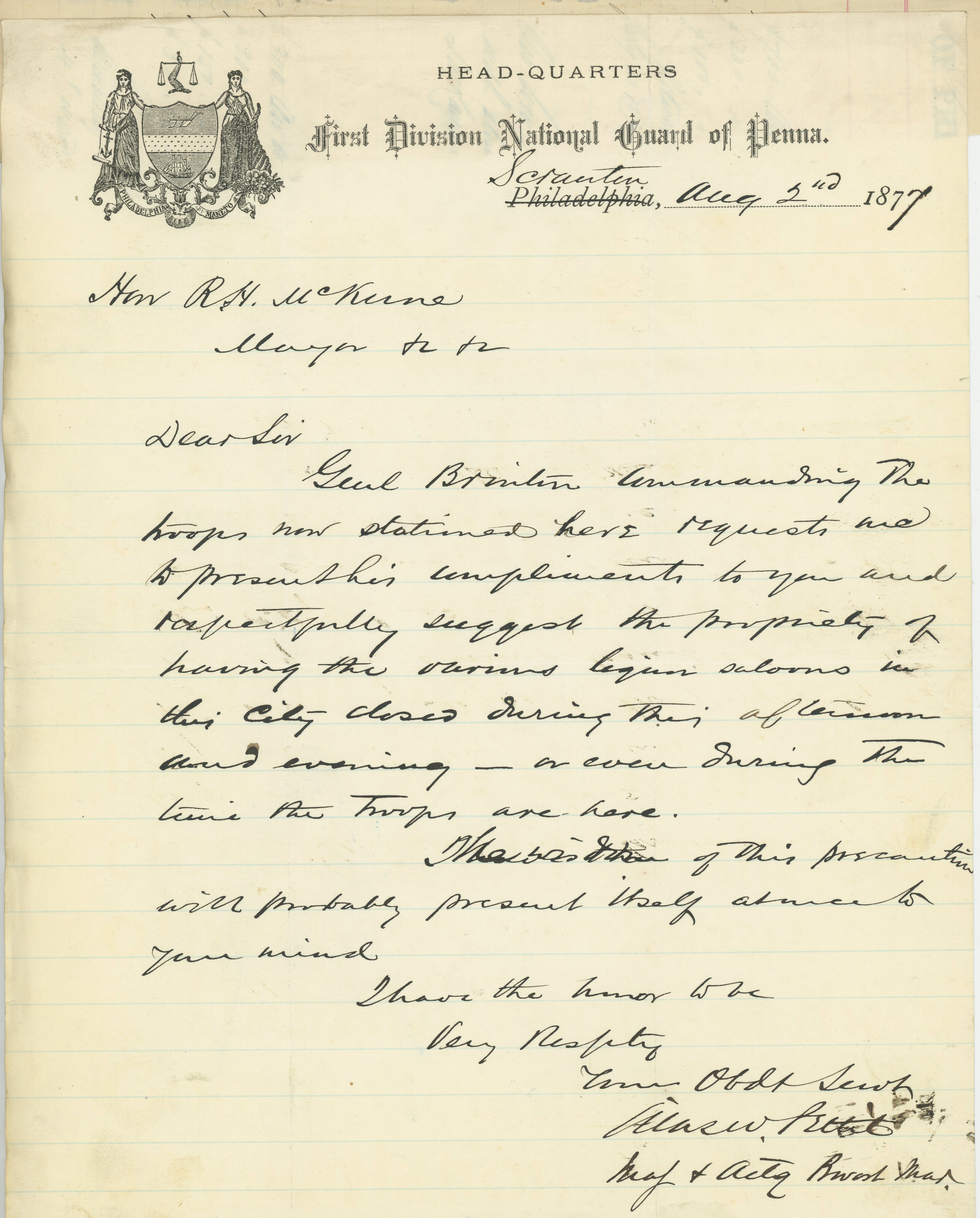 Scranton Aug 2nd 1877 Hon R. H. McKenna Mayor Dear Sir Genl. Brinton commanding the troops now stationed here requests me to present his compliments to you respectfully suggests the property of having the various liquor saloons in this city closed during this afternoon and evening – or even during the time the troops are here. The (unreadable) of this precaution will probably present itself about your mind I have the honor to be Very Respectfully Your Obdt Sevt. Silas W. Petite Maj & Actg. Provost Marshall 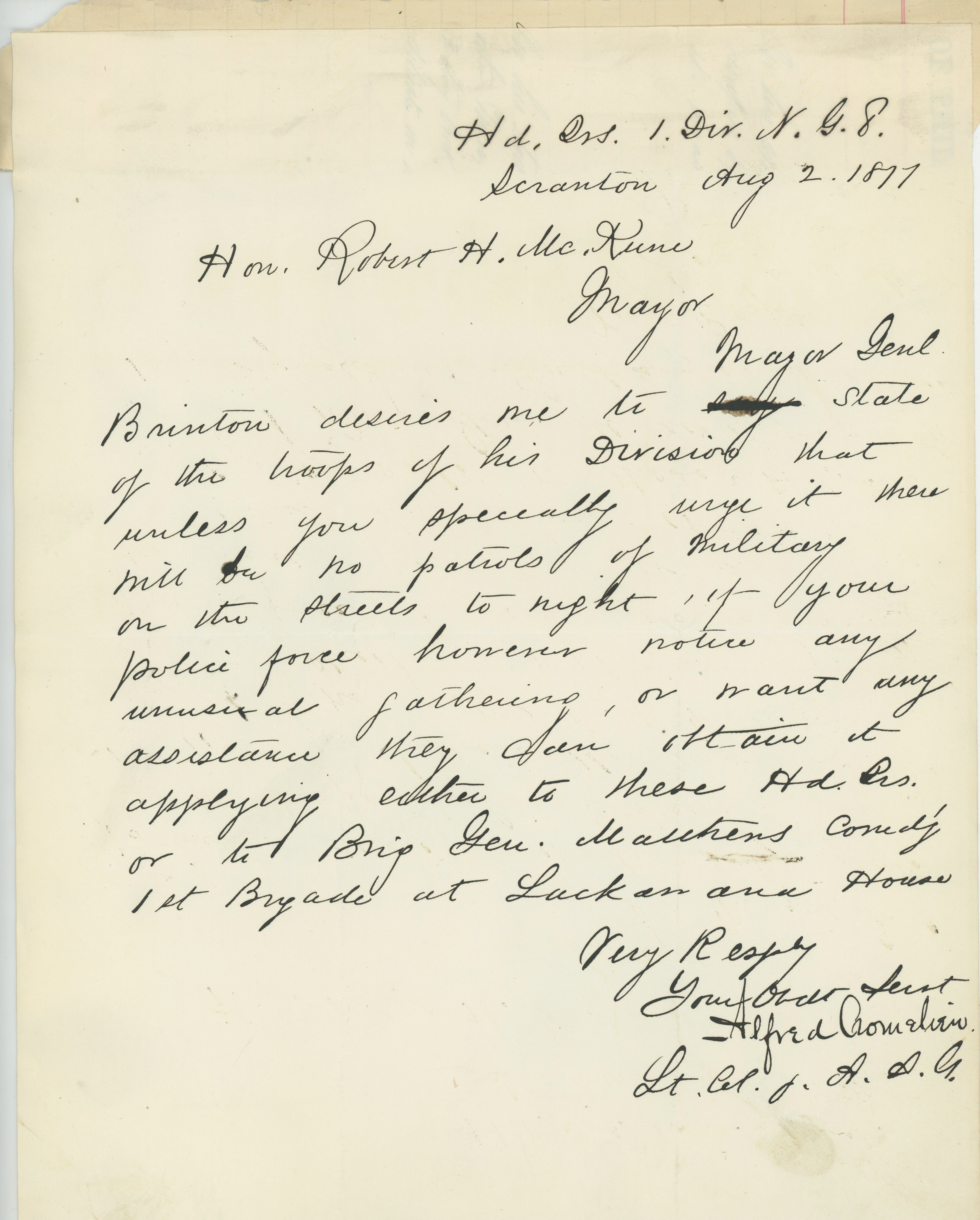 Scranton Aug 2 1877 Hon Robert H. McKune Mayor Major Genl. Brinton desires me to state of the troops of his Division that unless you specifically urge it there will be no patrols of military on the streets to night if your police force however notice any unusual gathering, or want any assistance they can obtain it applying either to MD. Ass. To Birg. Gen Matthews comdy. 1st Brigade at Lackawanna House Very Resptly, Your Obdt Servt. Alfred Comelieu

Word of Mayor McKune’s injuries began to circulate through the city and to his friends in other parts of the country. In Scranton, rumors that he had been killed circulated and would persist for many more days. In a letter written on August 2, 1877, Rodman Price, the former governor of New Jersey, explained his opinions on the strikes, actions that can be taken, and Mayor McKune’s injuries. 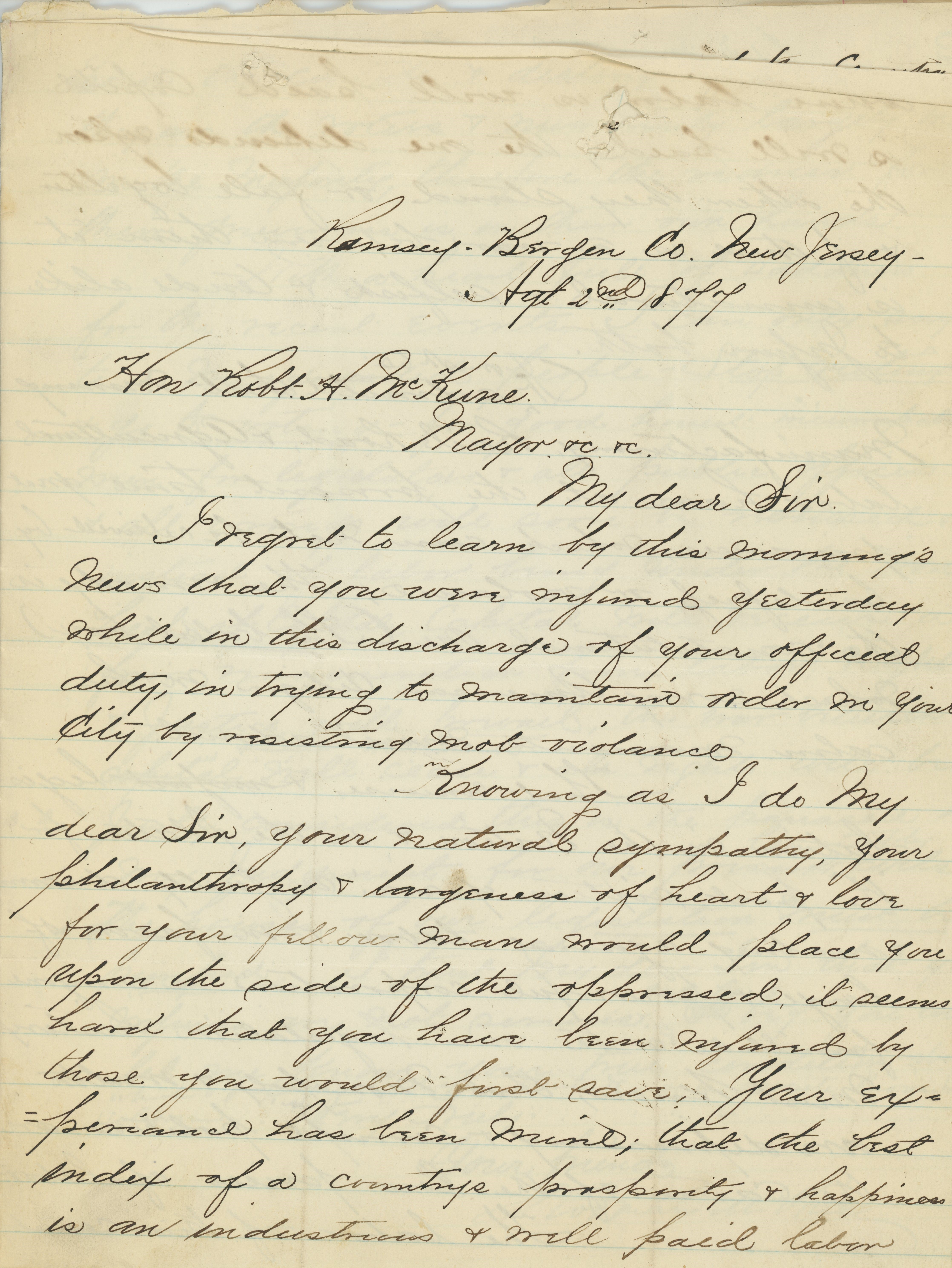 Ramsay, Borgen Co. New Jersey Agt 2nd 1877 Hon Robt. H. McKune Mayor &c&c My dear Sir, I regret to learn by this morning’s news that you were injured yesterday while in this discharge of your official duty, in trying to maintain order in your city by resisting mob violence. Knowing as I do my dear sir your natural sympathy, your philanthropy and largeness of heart & love for your fellow man would place you upon the side of the oppressed it seems hard that you have been injured by those who would first save. Your experience has been mine, that the best index of a country’s prosperity is an industrious and well paid labor 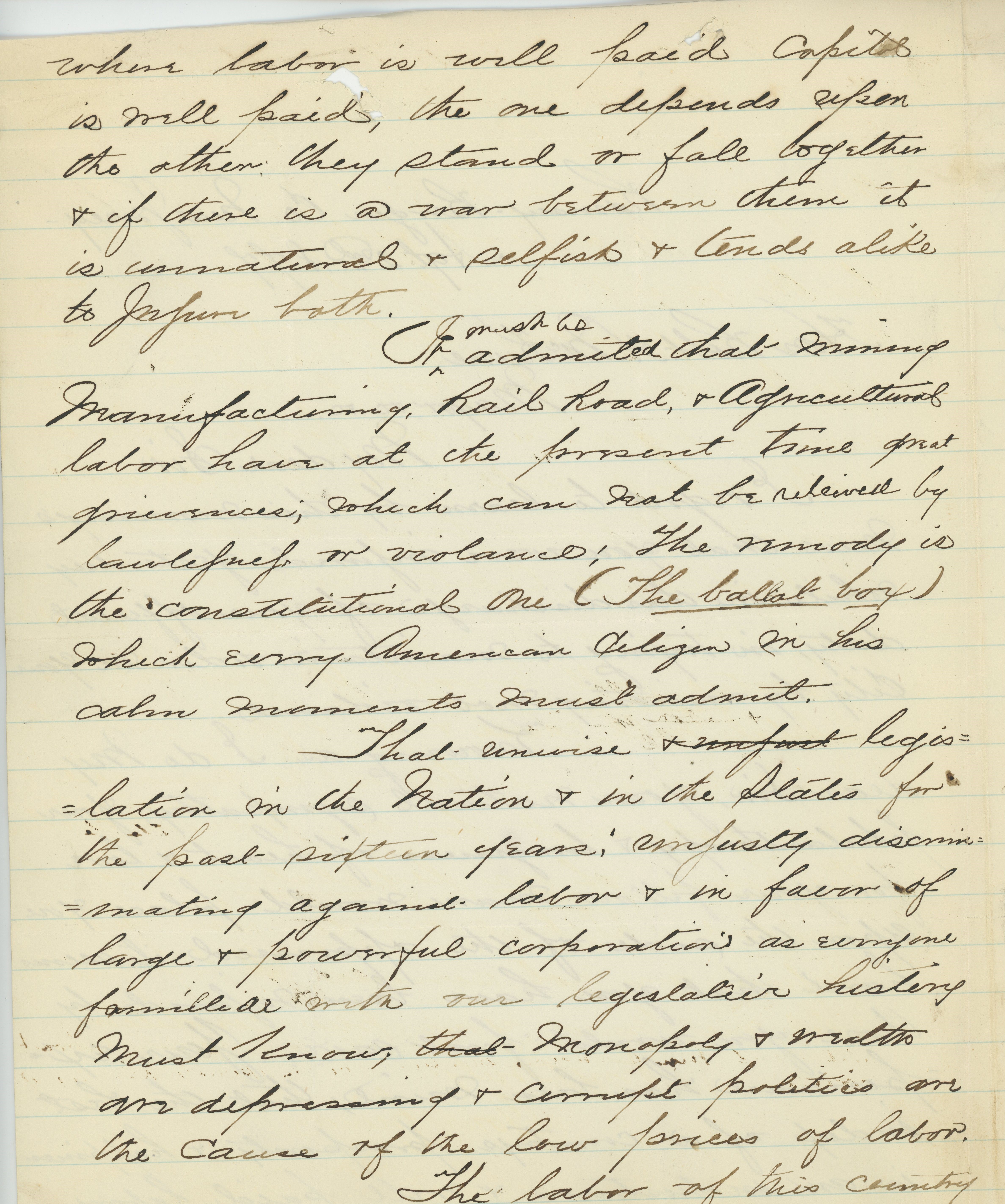 where labor is well paid capitol is well paid, the one depends upon the other they stand or fall together & if there is a war between them is unnatural & selfish & tends alike to injure both. It must be admitted that mining, manufacturing, Rail Road, & Agricultural labor have at the present time great grievances, which can not be relieved by lawlessness or violence. The remedy is the constitutional one (The ballot box) which every American citizen on his calm moments must admit. That unwise & unjust legislation in the Nation & in the States for the past sixteen years, unjustly discriminated against labor & in favor of large & powerful corporation as everyone familiar with our Regulation history must know that monopoly & wealth are depressing & corrupt politics are the cause of the low price of labor. The labor of this country 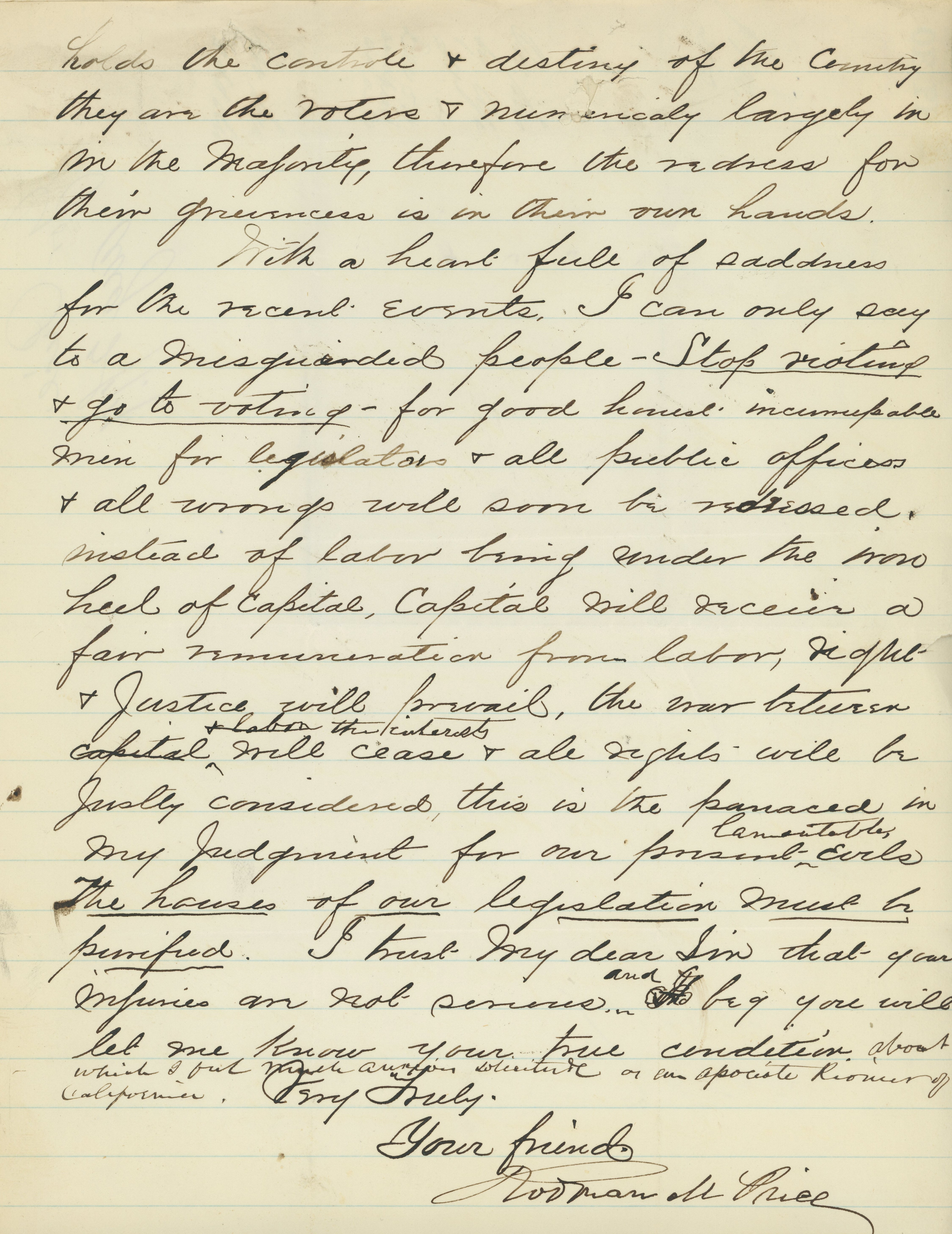 holds the controls and destiny of the country they are the voters and numerically largely in in the majority therefore the redress for their grievances is in their own hands With a heart full of sadness for the recent events I can only say to a misguided people -Stop rioting & go voting- for good honest incorruptible men for legislators & all public offices & all wrongs will soon be redressed.  Instead of from labor, Right & Justice will prevail, the war between capital & labor the interests will cease & all rights will be justly considered, this is the panacea in my judgement for our present lamentable evils. The houses of our legislation must be purified. I trust my dear sirt that your injuries are not serious and I beg you will let me know your true condition about which I feel much anxious [unreadable] or [unreadable] Pioneer of California. Very Truly, Your Friend, Rodman M Price